Fake Quotes Project/Aristotle/We are what we repeatedly do 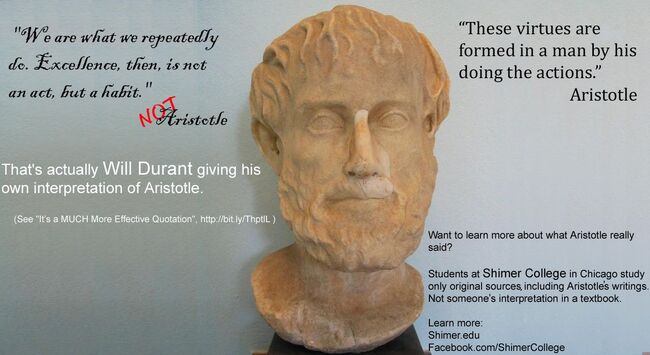 "These virtues are formed in a man by his doing the actions."

Aristotle
"We are what we repeatedly do. Excellence, then, is not an act, but a habit."
NOT Aristotle

That's actually Will Durant giving his own interpretation of Aristotle
(See "It's a MUCH More Effective Quotation", http://bit.ly/ThptlL)
Want to learn more about what Aristotle really said?
Students at Shimer College in Chicago study only original sources, including Aristotle's own writings. Not someone's interpretation in a textbook.
Learn more:
Shimer.edu
Facebook.com/ShimerCollege

Community content is available under CC-BY-SA unless otherwise noted.
Advertisement