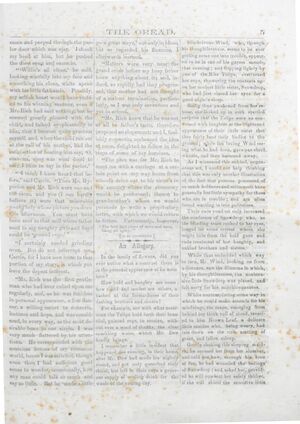 ﻿came and peeped through the parlor door which was ajar. 1 shook my head at him, but he pushed the do«»r opoji and camo in. “‘Willie’s all clean,’ lie said, looking wistfully into my face and smoothing his clean, white apron with his little fat hands. Possibly, my selfish heast would have yielded to his winning manner, even if Mr. Rich had 6aid nothing, lint lie1 seemed greatly pleasod with the child, and talked so pleasantly to him, that I became quite gracious myself, and, when the child ran out at the call of his mother, had the satisfaction of hearing him say, ‘O, maui’.na, sissy was weal dood to me; I likes to tay in the parlor.’ “‘I tliiuk I have heard that Ihj-fore,’ said Curie. “Then Mr. Hyperion and ilr. Rich were one and tilt same, and j'ou (I can hardly believe it) were that miserable young lady whose picture you drew this afternoon. You must have been sent to that mill where father used to say naughty girls and boys could be ‘ground over.’ ” “I certainly needed grinding over, lint do not interrupt me,, Carrie, for I have now come to that portion of my story, in which you have the depeot interest. “Mr. Rich was the lirst gentleman who had ever called upon me regularly, and, as ho was faultless in personal appearance, a line dancer, a willing escort to concerts, lectures and hops, and was considered, in every way, as the most desirable beau in our circle, I was I very much flattered by his attentions. He corresponded with the *en*ele6S heroes of my rumance-World, hem*-1 was satisfied, though even then I had sufficient good *eri6e to wonder, occasionally, how any man could talk so much and *ay so little. Hut he ‘made a little TflK OK RAD. go a great way-*,’ not only in ideas, but as regarded his finances, I afterwards learned. “Matters were very near the grand crisis before my busy father knew anything about it: and, indeed, S') rapidly had they progressed, that mother had not thought of a serious termination, particularly, as I was only seventeen and yet in school. “Mr. Rich knew that he was not at all to father’s taste, therefore proposed an elopement; and I, foolishly romantic, embraced the idea at once, delighted to follow iu the ■Steps of some of my heroines. “The plan was lor Mr. Rich to meet me with a carriage at a certain point on mv way home from school; drive out to his sister’s in the country where the cercmony would be performed; thence to grandmother’s whom we would persuade t<> write a propitiatory letter, with which we would return to father. Fortunately, however, ' Ti»t* hrist Uiil of Uiict* dutl Dtcii, (Jang ait n^lev.'" [ro hi: covrixvrn ] An Allegory. In the family of flowers, did you ever notice what a contr.ist there is iu the personal sppeur.iuce ot its meiu bers ? How bol l mul haughty are some ; how tiuki-1 anl modest are others, a-b*shed at the forwarIness of their d.udiing brothers and sillers! For example, see with what assurance the Tulips hold forth their beau-(Will, painted cup«, to receive, without ever a wotd of thank*, ftie clear hpaikliug water. which Mr. iJew kindly bungs. I leuiember a little incident that hipponolone evening, in their home, after Mr. Pew had made his nightly round, and not only quenched (heir (hirst, but left in their caps a generous snpply of cooling drink for the waul* of the coming day. . > Misrhrivous Wind, who, through his thoughtlessness, seems to be ever getting some one into trouble, appear-1 eii to be in one of hi* gayest mood”, ■that evening; and tripping lightly by one of the Miss Tulips, overturned h<?r enps, showering the coutents upon her modest little sifter, Snowdrop, who had just closed her eyes for a good uight’s sleep. , Buing thus awakened from her re-; po.-e, bhe looked lip in such startled i»urpri*e that the Tulips were so convulsed with laughter at the frighutied ; appearance of their little sisWr ih»t : they fairly bent (heir bodies to the igiound; ^hde fun loving Wind seeing what he bad done, gave one shrill i whistle, and then hastened away. A* I witnessed thi« nnkind, ungenerous act, I could not help thinking that this wag only another illustration | of the fact (hut persons possessed of : so much boldness and selfct-nceil have generally bin little sympathy for those ! who are in trouble ; and are ofteu ; found wanting in true politeness. Their rude conduct only increased the confusion of Snowdrop who, as 1 the Minding t<*ars rioheil to her eyes, lon"«J for some retreat where she might hide from the bold gaze and ! rnde treatment of her haughty, and 1 nnkind brother* and sisters. ! While thus nndecidel which way !(o turn, Mr. Wind, looking ou from ' advance, saw the dilemma hi which, bv his thoughtlessness, the unobtrusive Tittle Snowdrop was placed, and felt sorry for his mischievousness. While contemplating some way in which he coaid make amend* for bis misdoings, the moon, emerging from behind her thick veil of cloud, revealed to him Blown Leaf, a delicate | little maiden who, being weary, had lain down on the rich matting ol grass, and fallen asleep. Gently shaking this nl.-eping maid* rn, he aroa»ed her from her (.lumber, ' and told ber how, tbrongh his lovo •f fun, he had wonnded the feelings of Snowdrop ; andrv-ked her, provided he will cou-kict her safely tbither, if *ha will shield the sensitive little